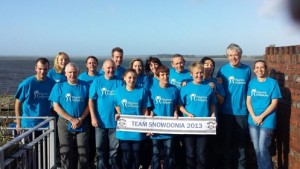 A big group of Dover Roadrunners made the long journey to North Wales to compete in the 31st Snowdonia marathon. According to the organisers of the event, this marathon is “demanding and spectacular” and is one of the most difficult in the UK.

A day of many seasons greeted the runners, as they joined over 1,500 other athletes on the start line. Steep climbs started almost immediately for the competitors, with stunning scenery, and sheep being the only spectators. The rough terrain continued for a few miles and the wind and rain increased as they neared half way only for the sun to finally come out.

Mile 22 arrived with a climb of over 1200 feet, which meant a rapid two mile descent to enthusiastic spectators who welcomed the runners in Llanberis, at the finish line.

The Dover team were led home by club stalwart Neil Coleman who finished in 352nd position in a time of 3hrs 46 minutes 14 seconds. Other times were :-

While all the runners deserve praise for a fantastic effort, special mention should go to Jon Wiles and Graham Foote who completed their first marathon . They could hardly have found a tougher challenge to make their debut at this distance!

Supporters of the Dover Road Runners obviously appreciated the teams amazing achievement as, through sponsorship, over £2000 was raised for the Pilgrims Hospice.

Donations are still being accepted here.