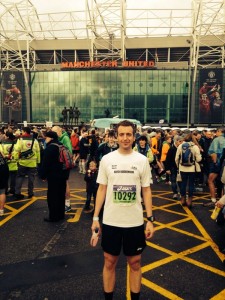 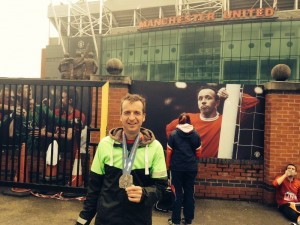 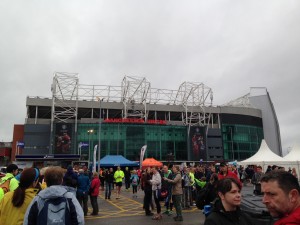 I arrived in Manchester on Saturday ready for the big race the following day.

On arrival in Manchester I decided to locate Old Trafford so that I knew where to go, and how long it was going to take to get to the race village the following morning. Once at old Trafford there was little activity about but I managed to locate the start area opposite the Stadium where there was a small area set up ready for race day, and the only thing open was a small Asics information tent. To be honest I was a little disappointed at the lack of ‘Expo’ and general advertising regarding the marathon. If I had not been in Manchester to run in the marathon then I would not have known that there was one happening!

Come race morning I was a bit nervous, but after breakfast and a coffee I was feeling a bit more excited. I travelled to the race start via the tram, and after the usual pre run toilet stop, I handed my bag into the baggage area and then there was a 5 minute walk to the race start.

I located the 3:45 pacer and went over to him for a chat, where he told me he would be keeping a constant pace throughout and would actually be running a 3:43 marathon! Oh well I thought….lets go for it!

The countdown started and we were off. This was it. This is what the months of training had been for.

The route headed out away from Old Trafford and towards Sale, Brooklands, and Altrincham, before doubling back on itself and then heading towards Carrington and then back towards Old Trafford. The route was well supported throughout and I passed many bands playing outside of pubs.

The water stations were well placed, and towards the latter stages were more frequent and had Shot Blok supplies.

My race plan was to focus, hydrate, take on Shot Bloks, and keep a constant pace, keeping the 3:45 pacer in my view. All went to plan until about the 21 – 22 mile point where I had a slight panic and flashbacks of Brighton, but I got through this only for my calves to start twinging. I decided the only action to take was to slow right down to avoid any cramping. By the 22 mile point I had lost sight of the pacer, but my aim now was to finish under 4 hours. The last 4 miles were tough as I thought I had more to give but my calves had other ideas. I finally had Old Trafford in my sight but it seemed to take forever to actually reach the stadium. The final stretch was in sight and although I wanted to sprint finish I was unable to, but managed to cross the line in a very pleasing 3hrs 52.15.

I had achieved my target of a sub 4 hour marathon. The Medal and Asics t-shirt were well worth the pain.