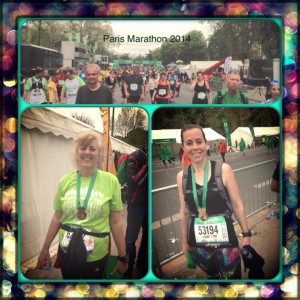 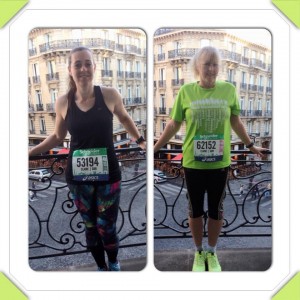 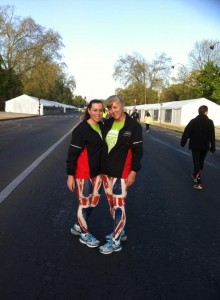 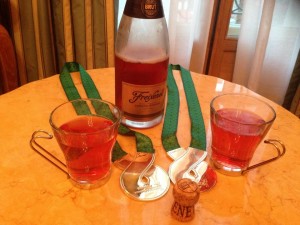 Elaine and I took part in the 2013 Paris Marathon and enjoyed our experience so much that we decided to return this year. However 3 weeks into our training, on 5th January, disaster struck. At 13 miles on our 14 mile run I suddenly began to experience severe pain in my lower left leg. Thinking it was muscle strain I rested and went for sports massagesessions with the local hero Tim Sutton. However after 3 weeks of no improvement it clearly needed something more. I consulted a sports physiotherapist and was diagnosed with Medial Tibial Stress Syndrome ( a form of shin splint) on my left leg. Treatment was manual therapy and rest, lots of it. No running for 6 weeks. Whilst I could still cycle and weight train there was to be no impact exercise. So my Paris Marathon was over.

I did manage to start running a little bit in March once my injury had recovered but had only got up to 6 miles so it was nowhere near enough training to run a marathon. I was determined to still support Elaine and went out with her most weeks on my bike while she ran. She was able to still do some of her long runs, but found it difficult without me running with her, and she also suffered from a calf strain during her training. So 3 weeks before the marathon, having only reached 14 miles, she also made the decision not to run the marathon. We had instead registered for the 5K Paris International Breakfast Run laid on by the marathon organisers, taking place on the Saturday morning, so wewere determined to still go and have an enjoyable weekend, having booked a hotel some months ago near the start line of the marathon. This meant we still needed to go to the Expo on the Friday  to collect our Breakfast Run t shirts.So while were there we of course collected our Marathon numbers. This made us very sad. It was not possible to defer our places.

That evening we then started to think the unthinkable. What if we just walked it, how long would it take? Or ran as far as we could and then walked the rest? But that was silly. We both woke up on Saturday morning and said it would be stupid, risky, total madness, and put all thoughts of it aside. Then we turned up at 8.30am to the Avenue Foch, (the finisharea of the Marathon) for the start of the Breakfast Run. And we both felt our emotions rising. The breakfast run was so much fun, everyone ran at the same pace, there was music playing the whole way round, everyone had flags of their country, and we wore Union Jack leggings which attracted quite lot of attention!  At the end of the run, once back at our hotel, we then started thinking about the marathon again. What if? No, it’s a ridiculous idea! But what about if we just started? We were going to go for a run on Sunday anyway, so why not make use of our numbers, start with the marathon, soak up the atmosphere, and just see how far we get. We could make a list of all the metro stations along the route so the moment we needed to drop out, e.g. if things became painful or would clearly cause an injury by continuing we would be able to get back to the hotel. We googled doing a marathon without training to see just how mad or bad an idea it was, and found that Jedward had done the Los Angeles marathon without training. A good BBC news article said that if you did it, it wasn’t recommended but if you had a good level of fitness, which we bothdid, and went at a slow pace you would manage it. We also looked up the slowest time from last year and was 7hrs 31 minutes. We calculated that if we ran the first 10 miles at 12min/mile pace we would get there in 2 hours, and then if we walked the rest we would finish somewhere between 6 and 7 hours. It was just about do-able. So we made a pact we would give it a go, all the way together, and if one had to drop out, we both would. But wait, Elaine hadn’t brought her long run trainers (only her short run ones which were too small for long runs). So what to do? Well, we were staying right round the corner from the Adidas shop on the Champs Elysees!! So decision made, off we went to buy Elaine new trainers, and very nice they were too. And I got some snazzy new leggings that wouldn’t go too badly with my compression socks that it was really important for me to wear following my injury. But wait, what about gels for the route?? Could we find any? No, so Haribo would have to do!!! Waking up on the morning of the marathon,  the pressure was off us!!! Opening the balcony doors of our hotel room we saw runners warming up, and could see them lining up on the Champs Elysees. Nerves were starting to build at themadness of what we were contemplating, but nothing compared to if we had been serious about it. Because we knew we had a plan B, the metro, and our list of all the stations, so there was no pressure. In reality although we were hoping we might finish, we really didn’t think we had a chance and that we would drop out when the right time came, and we would know when that was. We could hear the count down to the official start from our hotel room, and at 8.45 off they went. We didn’t leave our hotel room until 9am as we knew our wave wouldn’t be starting until 9.45. Even then we could have left it longer.

So there we were, in amongst all these marathon runners, who had trained for weeks and weeks, and felt a little bit fraudulent. But then we had done our best, circumstances had got in the way, and we had paid for our numbersso we may as well use them. We broke the race down into 5 x 5 miles plus 1 and a bit miles, and set ourselves milestones along the way. At 2miles we passed Starbucks where Elaine had to deal with a nosebleed in 2013. So getting past that was a good marker. Then we passed the 3 mile point, so further than we had run the day before. We then reached the first park at 5 miles, (the first 5 miles done!) Then the 10k chip marker, so the furthest that I had run since 5th January. At that point we had our first break, a drink and some Haribo. Then we checked we were both ok to continue running to 10 miles. We got there at 1.59.10, so 50 seconds within our 2 hour target. So far everything was going to plan. The next target was 13.1, the half way point! At 12 miles I started to feel the beginnings of a slight cramp in my left thigh, and then it dawned on me that I hadn’t thought about salt replenishment!! Cramp had been a big problem for me in my 2011 and 2012 London Marathons. I knew if it developed that I would find it difficult to finish. Then I remembered that theorganisers lay on bananas by the shed load, which are full of potassium. So they might help. I said to Elaine I needed to find some bananas at the next fuel station. As luck would have it one came up a very short while later and I grabbed some banana slices. I have never eaten a banana while running before so had no idea how it would affect me but Iwould soon find out. By the time we got to the half way point the cramp had completely gone. So I decided from that moment on that bananas would be my fuel for the rest of the race. At the half way point, feeling fine, we decided to carry on running to 15 miles, and before we knew it we were there, and the course now took us down by the River Seine. Then we remembered that our fellow club runner Leela was expecting us to meet her at the finish. We texted her at this point to apologise that we couldn’t be there because we had decided to run. We asked her not to say anything  – we didn’t want anyone to know as we didn’t quite know how itwas all going to end. From 16 miles we started to include short walk breaks but we kept going, and before we knew it we were at 20 miles. At this point it was particularly tough but somehow we dug deep and kept going. I actually started to believe that we were going to make it. My legs were getting a bit tired and heavy but there were no pains. We continued with our walk breaks and our min/mile pace dropped to between 12 and 14 mins per mile. It started to become apparent that the unthinkable was actually becoming a reality and not only that, we were on course for a respectable time. The support and entertainment all the way was amazing, from bands, dancers, kids high fiving, spectators lining the route and cheering our names and shouting words of encouragement, even a disco in one of the underpasses! I was delighted to see the fire department (close to my heart, being a part time firefighter) out in full force with their fire engines with rescue ladders erected over the course with support banners hanging from them, and fire hoses spraying water,  to cool us all down. We made sure we had a thoroughly good time, enjoying the atmosphere  and taking in all the sights that last year, focussed on a PB, I didn’t take in. This year time was irrelevant. Or at least it was until I realised I was going to beat my 2012 London time, (previous second best time) by 10 minutes and Elaine was going to get a PB over last year’s Paris time by 20 minutes. We crossed every chip marker on the course together, and crossed the finish line together, in 5:35:21, only 43 minutes slower than my last year’s PB, and a new PB for Elaine! (Elaine’s official time somehow came out 2 seconds later but we don’t understand how that can be as we started and finished at exactly the same time!) Then we both burst into tears!! What a day, what an achievement! While we hoped, we genuinely never really believed we would actually be able to do it. But we did! We couldn’t have done it alone but together we were strong and we made it. After a post race massage we headed back to the hotel and opened a bottle of sparkling rose that we had bought on Friday just to enjoy, using the hotel coffee mugs, and toasted our success. The next day, our legs miraculously still worked and we were able to enjoy the Monday sightseeing in Paris before catching the evening Eurostar home. This weekend will go down as one my favourite weekends of all time! I really wouldn’t recommend doing a marathon on no training but I’m really glad I dared to give it a go! We broke all the rules and had a blast!!