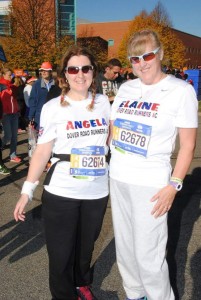 It is 4.30am on Sunday 6th November 2016 and we could not be more blessed with a better day for running the New York Marathon.  The morning was cool and predicted temperatures were for the mid-teens or high fifties depending on whether you prefer Celsius or Fahrenheit.  And they were not wrong.  The sun shone and the air was warm as we ran.

After breakfast in Danny’s next door to our hotel, which was the Edison on 47th and 7th, we got on the bus which left at 6.15am for the journey to the start line on Staten Island.  The bus travelled downtown to the Staten Island Ferries, which was the preferred mode of transport to the Island.  Then on the other side we took another bus to the start village, which arrived at about 8.30am, desperately in need of a cup of tea. At the village we had a free breakfast of bagels and donuts, but we declined and only had tea.  The village was very well set up with loads of toilets and services for the runner’s needs.  Here we had to wait as we were in the 4th wave with a start time of 11.00am.  We watched the runners from the waves before us go over the Verrazano Narrows Bridge.

The first New York Marathon was held in 1970 to which 127 entrants paid an entry fee of just $1.00 and the course was about 4 laps of Central Park.  55 men finished and the only female pulled out due to illness.  The race was organised by Fred Lebow and Vince Chiapetta.

In 1976 the marathon course changed taking in the streets of five boroughs of the City, including five bridges.  The boroughs are Staten Island, Brooklyn, Queens, The Bronx and Manhattan.  This year was the 40th anniversary of this course and this was commemorated on our medal.

The time was nearing 11.00am and we made our way to our Corral.  Here we disposed of our warm clothing in the charity collection points that we had purposely purchased.  The jackets were really warm and we hope that they serve some American in need well.  We inched our way nearer to the start line and finally came to a halt.  The “Star Spangled Banner” was sung live by a woman called Teresa.  The Americans took their hands to their hearts and sang along, a very moving moment.

Then we were off.  For two miles we ran over the upper level of the Verrazano Narrows Bridge, where we had a wonderful view of the sky line and then came down into the streets of Brooklyn.  The supporters were out and the noise was overwhelming.  Street entertainers were out in force singing their hearts out and playing instruments or spinning the decks.  Our names were on our T Shirts and the crowd shouted out to us.  We felt like superstars!

At the 8th mile we ran along Lafayette Avenue, Brooklyn to the 15th mile where we started the incline up the Queenboro Bridge and we left Brooklyn.   None of the bridges had any supporters on them so all you could hear was the pounding of feet and the sounds of the runners.  The other bridges are Pulaski Bridge (Brooklyn) at the 13th mile, Willis Avenue Bridge (The Bronx) at 19.5 miles and Madison Avenue Bridge (The Bronx onto Manhattan) at 21 miles.

We then came down the other side of the Queenboro Bridge at the 16th mile to First Avenue, Queens.  You could hear the noise of the crowd upon the approach and then you were there.  It was tremendous.

First Avenue was a long, straight stretch for 4 miles.  There were many inclines here and as you ran over to a decline you could see ahead many runners and it was a bit of a drag.  But finally, as we approached the 20th mile we hit Willis Avenue and we were in The Bronx.

We were only in The Bronx for 2 miles as we curved round onto 5th Avenue, Manhattan.  We ran alongside Central Park on the Upper East Side and entered Central Park at the 24th mile.  This bit of the Park was quite undulating.  We left the Park at the 25th mile and ran onto 59th Street alongside the Grand Plaza Hotel.  We then entered the Park again at Columbus Circle to pass the 26th mile marker onto the finish.

The finish was very well organised.  Once through you collected your medal, then it was over to the “Wall” for a photo shoot.  After that, you moved on to collect your goody bag.  Then there was a choice (which you make upon application) of either bag collection or a poncho.  We opted for the poncho and we had to follow the signs out of the Park onto 77th Avenue, Central Park West.  Then you make your way southbound and pass through the alphabetical meet and greet area.

Soon you were back at Columbus Circle and we had to cross over to Time Warner Centre to go down 8th Avenue, back to our hotel.

This was a very well organised Marathon. The NYPD and the FDNY were out on every street.  Security was superb.  Some officers were getting involved giving high fives to runners and cheering them on.  It was just great!

The hundreds of volunteers involved in this were just magnificent.  They were superb from the start village to finish area.  The re-fuelling stations were every mile and there was a choice of Gatorade or water.  It was quite an experience running through Gatorade on the road as it got sticky in the heat!  There were also food stations and people handing out sweets.

For Elaine and I it was a marathon of a life time.  We first spoke of running this marathon in October 2014 and we finally achieved our goal on 6th November 2016.  We had 5 nights in New York and took in many of the tourist spots and sights.  It was a brilliant time.  Back home we were tracker by many followers on the NYRR tracker, which everyone said was excellent.  Our followers had to wait til 4pm to start tracking us and many stayed up to see us through to the finish.  To this we thank you from the bottom of our hearts for your support.

“Get Your New York On”