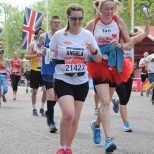 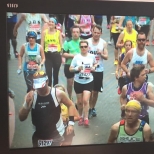 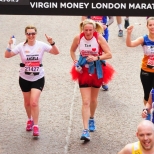 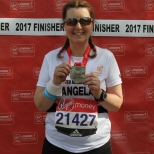 I was at the blue start.  I arrived about 08.30 from Orpington, where we were staying, via London Bridge.  It was a nippy morning and the start area had water as well as tea and coffee facilities.  There was a big screen relaying the morning’s events.  The only DRR member that I saw there was Gem.  I handed in my bag on the lorry and made my way to the start zone.  I abandoned my outer clothing for charity and ran across the start line 10 minutes and 43 seconds after the 10am start.  To my surprise Prince Harry and the Duke and Duchess of Cambridge were there clapping and waving as we set off.

The first 3 miles were OK at a steady pace of 10 minute miles.  We then merged with red start and the runners cheered.  Every inch of the ground was covered by a runner.  The lack of personal space was soon getting to me.  I longed for the field to thin out, but it didn’t.  I had to watch my footing as there was a lot of discarded water bottles on the ground.  All this concentration on my surroundings was taking away the concentration of the task in hand – the running.  It was building up to trouble.

I had reached Tower Bridge and it was a glorious sight.  The noise from the bridge reminded me a bit of New York!  On the other side as we turned into The Highway I saw my cousins from Colchester.  I crossed the half way mat and was on my way to Canary Wharf.  We hit a bottleneck as we entered Narrow Street, just after the 14th mile and a woman fell to the ground.  I ran to the nearest marshal as other runners attended to her.

I remember going through the 18th mile and the 30k marker and I don’t know how it happened.  But HELLO, the demons had arrived.  They were running around in my head questioning my ability to finish.  I was breaking up.  I started to panic; I didn’t want to let everyone down.  How was I going to fix this?  I got to 20 miles and saw Giselle and Adam.  As Giselle held me close to her my emotions came out.  After their kind words of encouragement and reassurances I set off again.

The next 5 miles were a mix of running and walking and are a bit of a blur.  I heard our Sarah Stevo and her friends shouting for me and I ran across for some more embraces before setting off again.  I finally came to the Embankment and went through 23 miles.  My Mum and Dad were going to be somewhere near 24 miles.  As I approached I kept my eyes peeled for them and saw them just before the 25th mile.  More kisses and cuddles I set off again, making a pact with myself to keep running until the finish.  It was so great to see everyone, even if it was just for a fleeting moment.

I ran along Birdcage Walk and saw the Queen Victoria statue ahead.  Just before I turned the corner a gorilla and a storm trooper overtook me.  That was it; I was on the last stretched, the world famous finishing stretch up the Mall.  From the Marathon Foto pictures I was smiling.  The demons were leaving and happiness returned.  I crossed the finish line in 4:53:39, the last of the magnificent seven!

It was a privilege to run the marathon and even more so as the club runner.  I had even made the BBC coverage, even if it was for a nano second!  It will be my one and only time.  I shall go down in the club’s history book as the 2017 club runner.   Come November, I will hand over the baton as it were, to the next successful member.  Thank you so much Dover Road Runners for this opportunity and congratulations to the 6 other member who took home a medal.