I completed the above race today and despite only running a couple of times since the Paris marathon 7 weeks ago I somehow managed an official time PB of 56.30, 48 seconds off last year’s time at the same event and my previous 10k pb. Slightly disappointed that the course proved again to be slightly long, as commented on by others too, and my Garmin recorded my time as 54.39 at 10k. Never mind though, I still got a pb, totally unexpectedly. I was intending to just enjoy taking part as I hadn’t had time to train and thought I would be lucky to come in under the hour and it’s nice to know I can run a 10k in under 55 mins, another milestone achieved!
The race itself was fabulous, despite a bit of a hold up in the baggage area before the start. We were lucky with the weather, glorious sunshine, although it did make for hot conditions out on the course. It was a shame that Mo Farah had pulled out a couple of weeks ago but he did at least start the race off. The course, the same as one lap of the London 2012 Marathon, took us up the Mall past Trafalgar Square and out to the Embankment for a couple of Km. We then did a dog leg through Leadenhall Market then back along the Embankment, down Birdcage Walk and a finish in front of Buckingham Palace. A typically magnificent Bupa race medal and finisher T shirt were the rewards. A highly recommended race! I will certainly be going back next year. 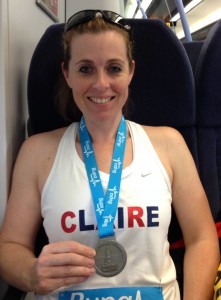