With some trepidation, Mike and I headed for Bewl Reservoir on Saturday morning to take part in the Bewl Water marathon and half marathon, an annual event organised by Hermes Running. Apart from the foul weather, heavy rain and strong winds predicted, the marathon had ‘sort of crept up’ on Mike so as usual he had not done much training. I had opted for the half but having just recovered from bronchitis was not expecting a good time, assuming I even made it to the finish!

It was raining hard when the marathon started at nine a.m and Mike set off with a strong field of seasoned marathon runners. The marathon course consisted of two circuits of the reservoir, mainly off road but with some quiet country lanes. By the time I set off at ten with the other half marathon runners, the rain had eased a little but the tracks had become mud baths! Amidst the usual crowd of screaming girls teetering around the biggest puddles and some ‘hard nut’ who jumped in all the puddles feet first, splashing everyone within a 10 feet radius, but not so hard when I overtook him struggling up a hill at mile 9!

At about mile 10 when we re-joined the lake, the rain had stopped and we were rewarded with a beautiful view of the lake, lit up by the sun. The last couple of miles were particularly hard, more ups than downs but by this time I knew I was going to finish, hopefully in one piece. I crossed the finish line in 2.16, though a PW, under the circumstances and given the challenging course, I was happy with that. The medal was impressive too!

Meanwhile Mike completed his first circuit in 2.48 but found the second half particularly difficult as the paths by now were churned up and extremely slippery. However in his usual style Mike pressed on, exchanging friendly banter with fellow runners and admiring the scenery and wildlife as he skated his way through the miles. At last, having pushed his way up the final hill, he crossed the finish, with the usual big grin, in a great time of 6.12 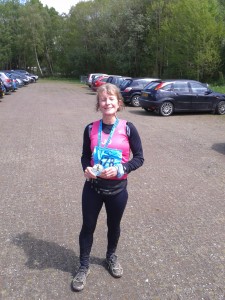 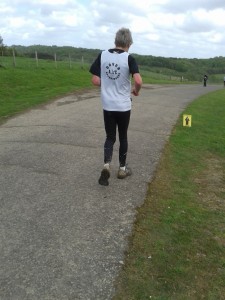 We both enjoyed the challenge, the race was well organised, and although there was little spectator support, the medals, t-shirt and ample cakes on route and at the finish more than made up for it! A special mention for Mike for completing his third marathon since being diagnosed with prostate cancer – what a star!