Rain did not stop play on the Easter Sunday Breakfast Run, as 16 DRR’s set off from the Farthingloe Farm. We headed for the hills, then up on to the cliff top paths for stunning views right across to Folkestone. We passed the Abbots Cliff sound mirror which was used in the second world war to detect over seas movement of  troops and artillery, so I am sure the people of France could detect  the happy chatter of the Dover Roadrunner Troop as we whizzed by.
We then headed back over the paths back to Farthingloe Barn for yummy  Breakfast.
Thanks to all who came along see you next time.
Sylvia 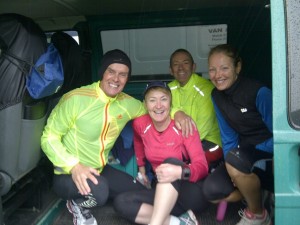